Cheshire Day was yet another glorious late September day and was what the 14,000 racegoers were treated to as they filed in for a seven race card where the going was described as good, good to firm in places.

The Boodles EBF Novice Stakes over 7 furlongs, for 2yo’s, kicked off proceedings. The Sir Mark Prescott colt, Mahagoni, was sent off the 5/4 favourite and duly obliged. Sir Mark is always definite about how he wants his horses ridden and stylish seven pound claimer Morgan Cole explained she was told to sit second from the break but “we didn’t break well and I was forced further back than I wanted to be. I realised I needed to be closer and thankfully was able to make ground relatively easily between the 5f and 3f post. He travels well and picked up for me nicely in the straight, I think he had plenty left at the end” was how she described the race and few could argue. Favourite backers were off to a great start. Point Lynas, second at 11/4 will win soon and Bolton Abbey at 4/1 in third ran a creditable race.

Angela and Peter, were the Christian names of the eponymously named Mr & Mrs Wilson Handicap, which was Race 2. A seven furlong contest where nine went to post. Muntadab was determined to get the lead and repeat his previous track win but he found the pace a little too hot at the business end of the race. Ffion travelled well in behind and looked to be in the right place to pounce as the free going Legal Reform took over but in what was a strongly run affair, 16/1, Roundhay Park proved too strong and came home by a neck. Jockey Fay McManoman celebrated her first win at Chester with a big smile “he is such a lovely horse and to ride a winner at Chester on him is very special. To ride horses like him on a Saturday here and win makes it all worthwhile”. Ffion finished second at 85/40F and look out for Legal Reform next time out, who was third at 8/1. He is very well handicapped and that is the first time he has looked like the force of old.

There was £26,000 on offer for the Support the Injured Jockeys Fund Nursery Handicap  over 6 furlongs and it was a strong looking bunch of 2yo’s who took to the track. The Dascombe yard have been “on fire” at Chester this year and so it was no shock to see the best rated, Flaming Rib, from their yard, sent off the 9/4 favourite. Pierre-Louis Jamin “pinged the lids” and put the pace to the race on the favourite with David Evans horse, Dora Penny in hot pursuit. They were, however, all chasing in vain as this classy colt quickened away from the field. It was an impressive performance, giving almost a stone to your nearest rival. It was also a first win at Chester for the young 5lb claimer who was elated. “The way he quickened, he is a good horse and I feel he has won that easy”. Assistant Trainer, Colin Gorman thought bigger assignments would be on the card with a listed race at York and the Rockingham possible targets. Navello, came from a long way back to finish second at 11/2 and Dora Penny at 5/1 finished 3rd. She will likely pick up one of these shortly.

The Ideal Recruit Edward Bryan Jones Memorial Handicap was race four. The distance was 1 mile and 2 furlongs and right from the “off” the favourite, Baryshnikov (5/2) was in trouble. Out the back and never travelling, favourite backers knew their fate early, he did well to finish fourth. Meanwhile, at the head of affairs, pace setters Lawn Ranger and Franny Norton on Mr Excellency were towing them along at a good clip. On quick ground it’s never easy to pull back the leaders and despite the efforts of Satono Japan, who ran a much better race to finish third at 6/1, the leaders never came back to the field as Norton’s mount pulled out a little more from the front to win by a neck. Mr Excellency at 11/4 was not much relief for bookies as the “King of Chester’s” rides are always well backed and there was each way money at 8/1 for the 2nd Lawn Ranger.

In Race 5, the Boodles Novice Stakes, Mujtaba, from the William Haggas stable was sent off the very short 1-4 favourite. On paper he appeared to have almost a stone in hand on previous form and so it proved. Jockey Dane O’Neil decided to follow Paul Hanagan, riding Shomoukh, who set a sensible gallop and when O’Neill pulled the Shadwell Stud gelding out in the straight, to make his run he quickened well enough to win comfortably. O’Neill explained why he was only having his second run as a 3yo. “He was big and backward and we needed to geld him. This was better again than Chepstow and he will have learnt a lot. We just need to be patient with him and he will continue to improve”. Brian Meehan’s, Ciotog, ran a tidy race to be second at 18/1, there is definitely a race in him. Shomoukh held on well to be third at 10/1 with Richard Fahey now knowing he has a horse capable of winning soon as well.

The Mental Health UK Fillies Handicap was Race 6 with eight fillies going to post. Bookmark was perfectly delivered by Hayley Turner to win at the previous meeting and punters thought she might just do it again as they backed her horse into 7/4 favourite. Sadly for them, “there was little pace in what was a messy race” according to winning jockey, Paul Hanagan. What pace there was, was dictated by Rob Hornby on Galah. With the exception of the favourite, who tried to come again from the rear of the field and wasn’t all together lucky in running, the placed horses were all handy in running. Libby Ami, 5/2, could only finish third, having what looked like a great run round, with the 20/1 shot, No Nay Never, leading right in to the shadows of the post only to be collared by Tim Easterby’s, Golden Melody, with Hanagan taking the spoils by a head. Paul was fulsome in his praise for the three-year-old filly “she didn’t settle easily but has a great attitude. The step up in trip was fine. She really needs an end to end gallop to be seen to best effect” suggesting there is still more to come.

In our final race, the Fireworks Extravaganza, over an extended 1 mile 6 furlongs, Andrew Balding and Rob Hornby teamed up with the 13/8 favourite, a 10 race maiden called Auriferous. They must have thought they had it won, with Hornby sitting on a good 4 length lead as they turned to face the judge. However, the relentless gallop set by both him and Fire Eyes, took its toll. From way back in the pack, rolling down the centre of the course, as he has done all year, John Egan picked up the pieces of a race he said “fell apart”.  Victory was by the narrowest of margins, a nose, but it was enough to see money stay in the bookies satchels as the judge awarded the spoils to John Butlers, Sophar Sogood.  John Egan said “I thought they had gone off quickly and I was happy settled towards the rear. I wasn’t sure I would pick them up but we did just enough”.

It was another enthralling days racing on the Roodee and with just the one meeting remaining in the season it feels like it’s all coming to a close too soon. Cheshire Day, like the county it was named after, delivered a great days entertainment. Roll on October 2nd. 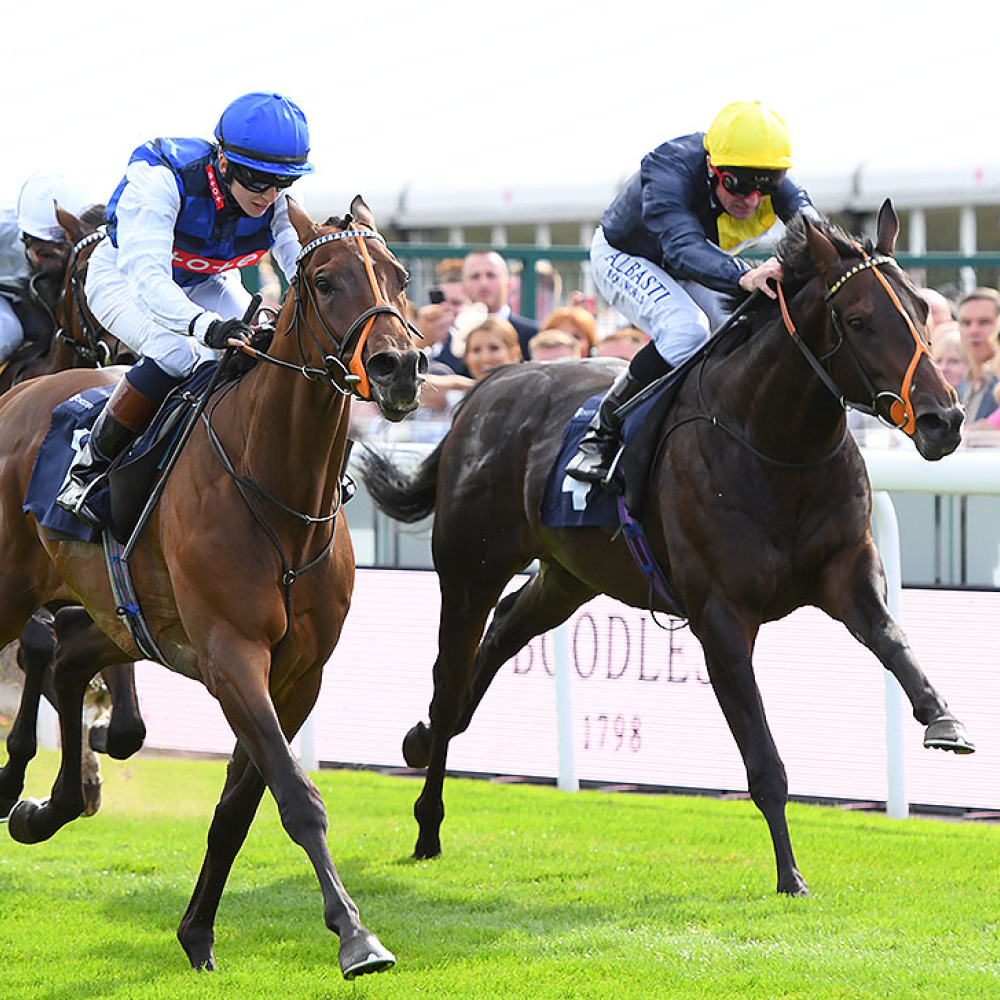 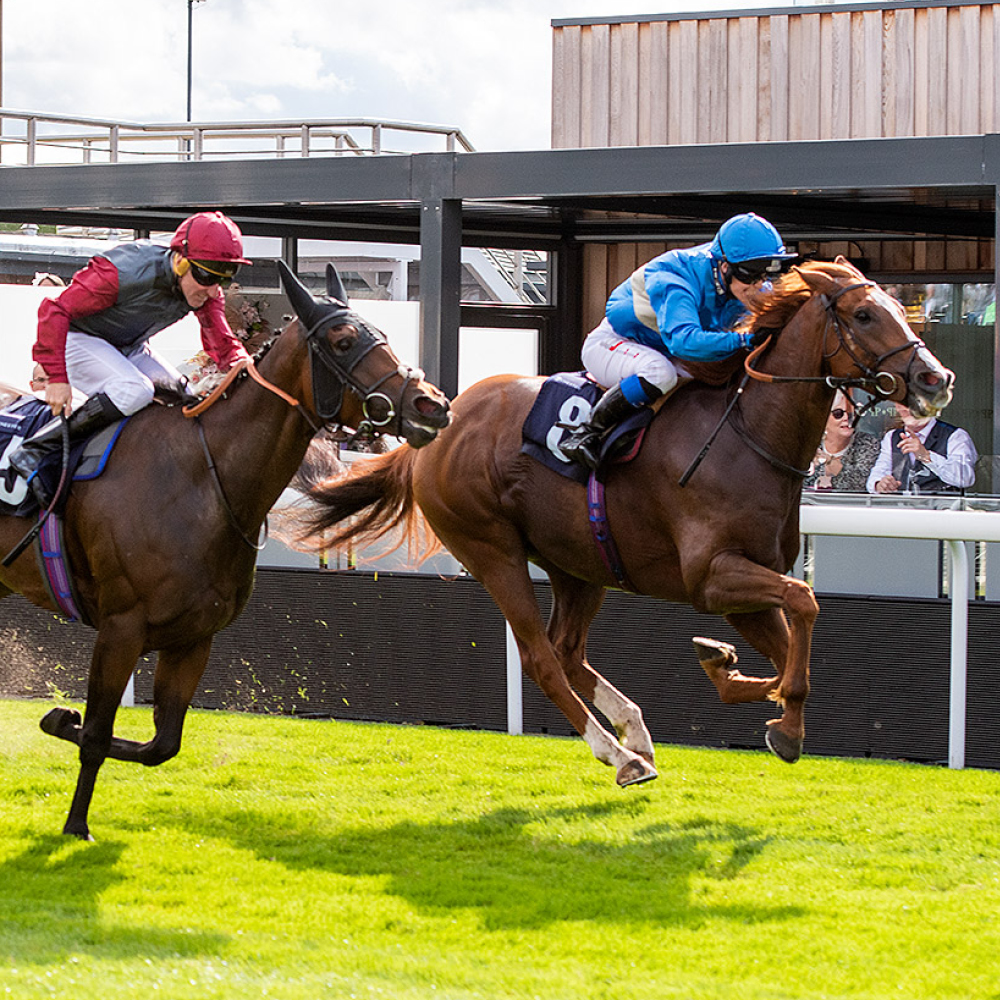 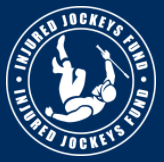 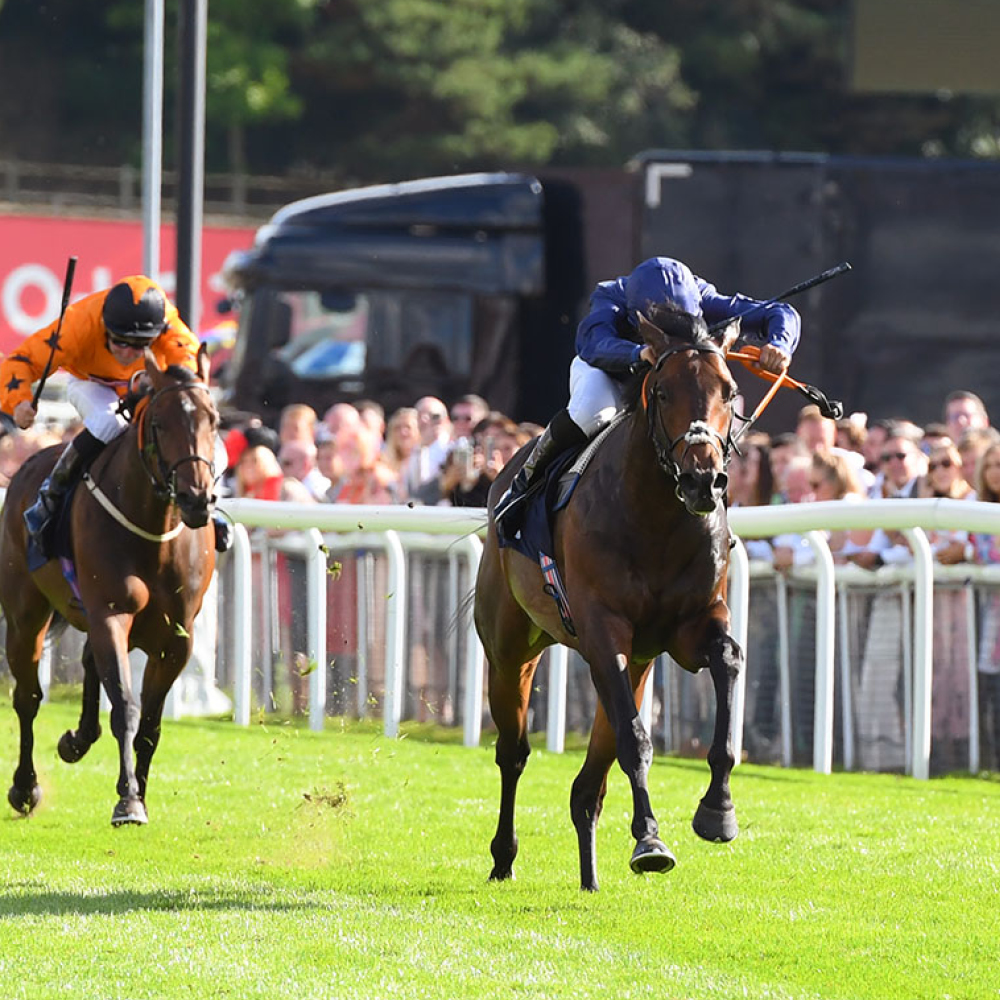 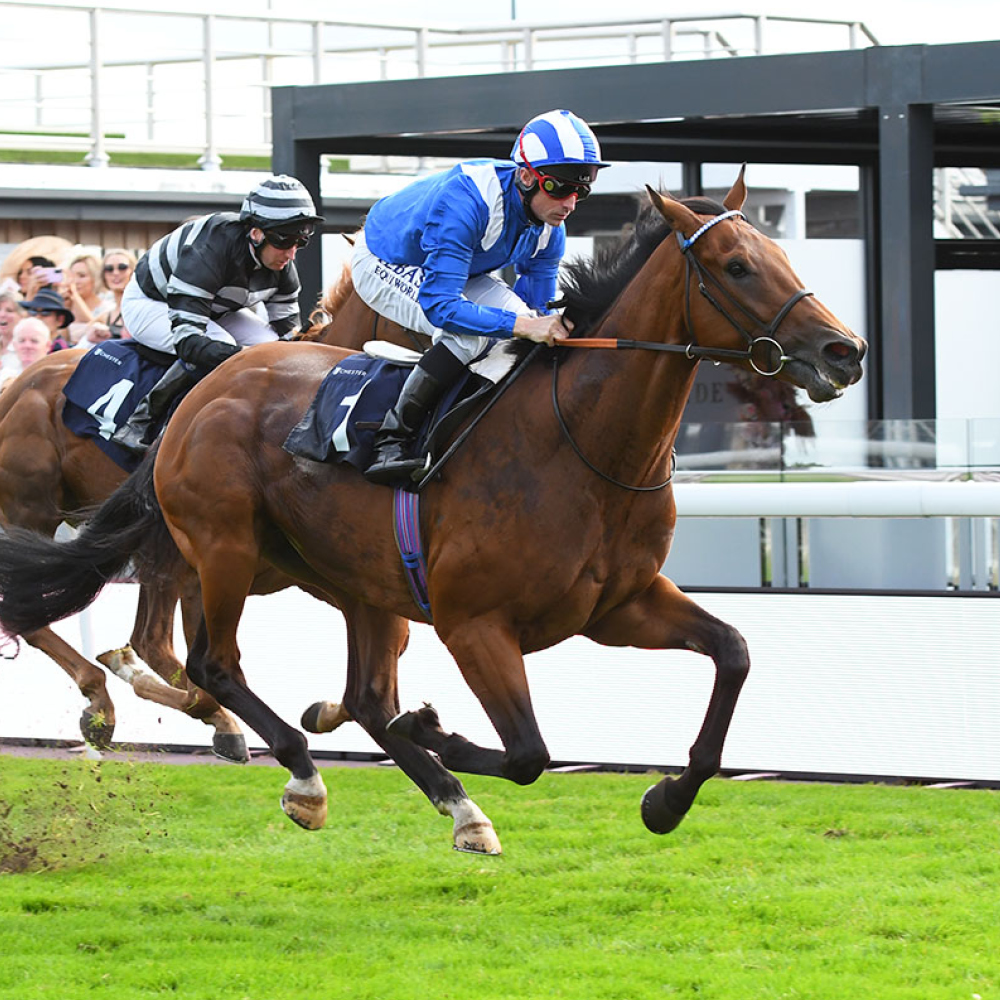 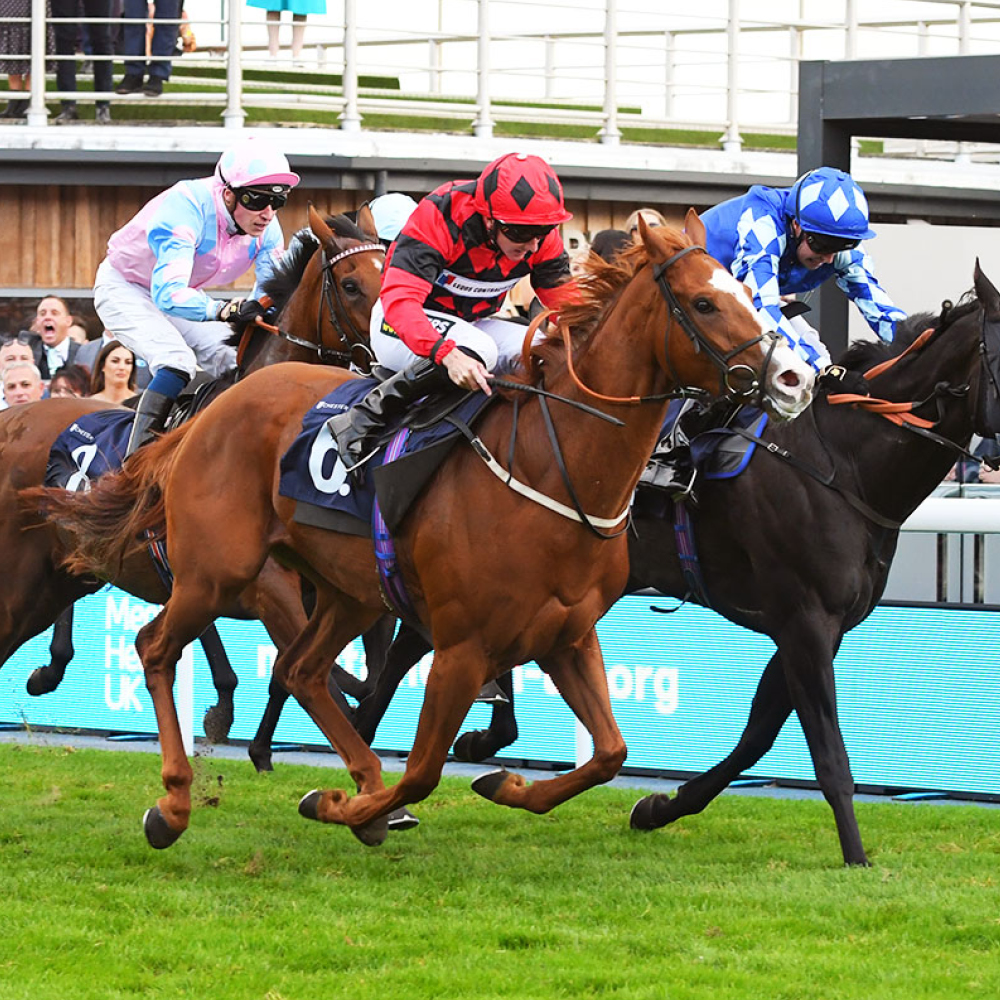 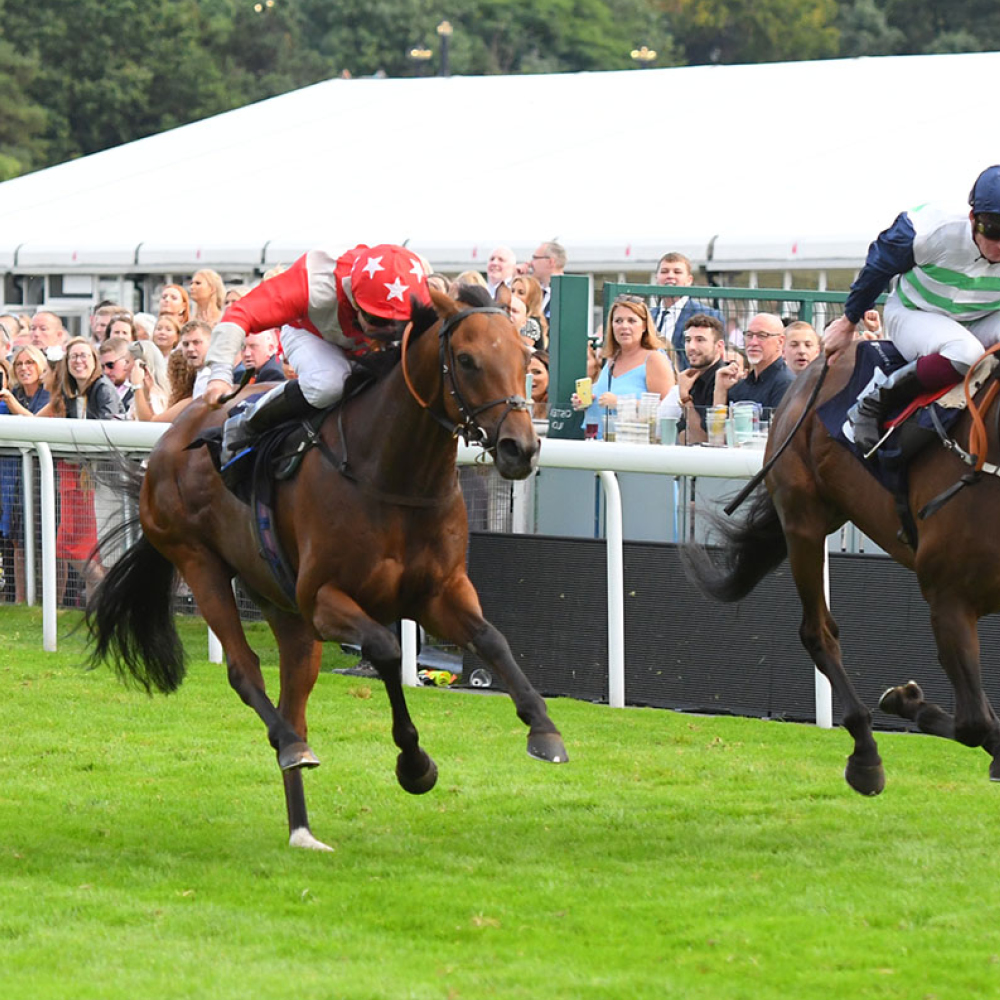